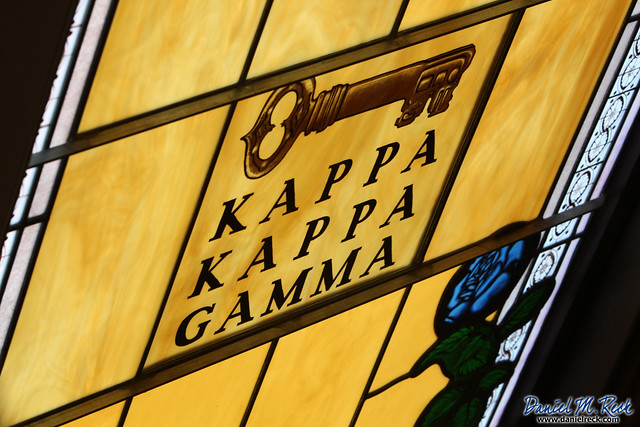 Kappa Kappa Kamma, along with Pi Beta Phi, was founded at Monmouth College. The names of both fraternities appear in the stained glass windows of the college's Dahl Chapel.

The Key, the Quill, and the Arrow

Remarks at the Panhellenic Council Awards Banquet
December 2, 2009 at 5:30 PM
The Stockdale Center at Monmouth College

Good evening, and congratulations to everyone.  Not simply congrats to those who won awards, but to everyone here.  You have become part of something special, a fraternity, a family.  You are sisters.

However your fraternal family is much larger than the 156 sisters here, or even the 316 fraternity brothers and sisters at Monmouth College.  Would you believe, that between your three organizations, you have almost six hundred thousand sisters?  If you were to bring them all to one place, they would fill April Zorn Memorial Stadium 219 times.  That’s more than half a million people in your fraternal family!

That’s also a lot of success.  Think about it: Each of your organizations was started by a dozen or so women, and now there are hundreds of thousands of sisters each in Alpha Xi Delta, Pi Beta Phi, and Kappa Kappa Gamma.  How did they find—scratch that—how did they create this success?

Well, it wasn’t by promoting your fraternities through Facebook or Twitter.  This was the 19th century; these women were literally in the middle of nowhere!  Alpha Xi was founded in Galesburg, and Kappa and Pi Phi here in Monmouth, in an era predating the electrical light, never mind electronic mail.  In our modern world where Super Bowl commercials run $100 million a minute, sometimes its easy to forget that the simplest marketing is the best, and the simplest thing for your sisters to promote was their success.

In 1867, 1870, and 1893, when Pi Phi, Kappa, and Alpha Xi were begun, fraternities were academic organizations to the core.  Often they were borne out of literary societies, and their focus was on the elevation of the mind and supporting the success of the sisters.  That was what was attractive about these early fraternities.  Potential new members may have been interested in the social aspects and special rituals, but most of all, they wanted to do well in life, and recognized that women in these fraternities succeeded in the classroom and beyond.

So how do we translate what happened then, when the “Battle Hymn of the Republic” was composed by Kappa sister Julia Ward Howe, into what we do now?

Well, Ms. Howe had a Key, so that’s not a bad place to start.  We need a key, too.  In this case, the key is your current success.  The women’s fraternities at Monmouth College boast a 3.1 GPA!  You accomplish this with study programs, educational programming, celebrations like this evening’s, and incentives for members who do well.  This is why you came to Monmouth, after all, to leverage education and knowledge to become successful.  So even with all the other things we do as fraternity members, let us never stop thinking about how to improve our academic selves.  This is the Key, as it were, to our identity as fraternity members.

Besides a key, what else do we need?  Federal Judge Diane Wood made her career researching legal opinions written by others and then writing her own, which go on to shape laws and lives all over the country.  She is a senior lecturer at the University of Chicago and has written several works, including a prominent piece about sexual discrimination in life and law.  As such, this Alpha Xi sister has been described by the Chicago Tribune as a “rock star of the written word.”  It is ideal, then, that she carries a Quill.  Judge Wood, like all of us, represents her fraternal affiliation through her work.  As she writes and communicates about her work, we too should make a point to communicate about our work as fraternal organizations.  Let’s spread the word about the good things we do!  Without the Quill to inform others, no one will know about our Key: Our success.

However, what good is a Quill or a Key alone?  Stories about past accomplishments are all old news.  Why did you become a fraternity woman?  To bask in the glory of others, or to create a great future for yourself and your sisters?  Physician and chemist Anna Fisher was not content to sit around, and so she set a new course, literally.  In 1989, she flew like an arrow into orbit aboard shuttle Discovery, becoming the first mother in space.  Back here on earth, and as a Pi Phi, Dr. Fisher has continued her contributions to scientific knowledge and through her work will likely change and improve lives on our planet for generations to come.  It couldn’t be more appropriate that Dr. Fisher wears an Arrow, as she gives us direction, leading us into the future.  Similarly, we as fraternity members must also be leaders, confident and intentional about what we do.  Without a good plan, as clearly drawn as an Arrow, how will we use our Key or our Quill effectively?

For us to be at our best as a fraternity community, we had better work together.  Remember the Key, it is our success.  Remember the Quill, for we must communicate well with the world.  Remember the Arrow, which directs us onward, with well-laid plans and wise leadership.  Alone, the Key, the Quill, and the Arrow are nice things, just as individually Kappa Kappa Gamma, Alpha Xi Delta, and Pi Beta Phi are nice fraternities.

United in Panhellenic Spirit, though, you can be a formidable force, one which perpetuates success, one which will tell the world about it and invite others to join in that success, and one which will never stop the quest for making tomorrow better than today.

The Key.  The Quill.  The Arrow.  You are Sisters bound together as one great family.  Let us be the best family we can be.

Daniel M. Reck, M.S.Ed., is Assistant Director of Greek Life, Leadership, and Involvement at Monmouth College.  He is affiliated with Sigma Nu Fraternity.