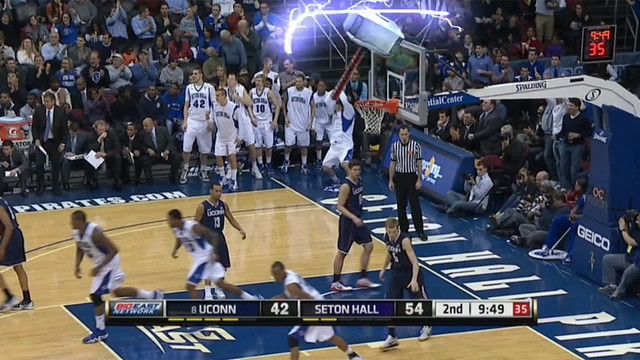 After years of studies, senior Peter Dill has finally been recognized for his outstanding work at Seton Hall University.

In a 60-second lead-in to the ESPN Top 10 segment on January 4, anchor John Buccigross noted Dill's oustanding academic record had placed him on the "honor roll every semester."

Given the NCAA regularly runs commercials which say, "There are 380,000 NCAA student-athletes and most of them will go pro in something other than sports," [VIDEO] it seems natural that ESPN would highlight a student-athlete's studies and give him national media attention.

Unfortunately, that is wishful thinking. Buccigross' offhanded comment about Dill's scholastic accomplishment only appeared in the 12:56 p.m. ET broadcast (as captured by YouTube user kenexakauffman). Repeats of the segment, including the one ESPN posted to YouTube (above), omit the recognition. Instead, they only feature Dill's sideline antics as a walk-on basketball player for the Pirates.

In this YouTube clip, anchor Kevin Negandhi says that although Dill has only played "eight career minutes, he's the ultimate cheerleader."

As no fewer than seven clips played of Dill pantomiming victory poses, including Aaron Rodger's belt celebration and slamming a giant hammer, co-anchor Linda Cohn gushes, "Good for him!"

The segment has earned mentions for Dill throughout the blogosphere on SBNation, The Huffington Post, SportsGrid, and Athlon Sports, among others, but not one highlighted Dill's excellent academic performance beyond the court, only his jubilatory cheers from beside it.

Seton Hall University did not even bother to pounce on the press field day to highlight their academic programs or Dill's individual classroom prowess. The segment is not even acknowledged on the university's website, even though it notes Seton Hall's basketball victory over University of Conneticut.

In fact, aside from the single utterance from ESPN's Buccigross, the only mention about Dill's academic life is a footnote on his official bio, "Dean's List member every semester so far at Seton Hall." (It does not even list his field of study, nor could I find it after several searches.)

Though this should give us pause, this is not a condemnation of college athletics. Indeed, there is a strong argument for well organized co-curricular activities for students, including athletes.

"Athletic competition has many virtues, as I can attest," says Oscar Robertson, a former college, Olympic, and professional basketball player in a recent commentary featured in The Chronicle of Higher Education's recent "What the Hell Has Happened to College Sports?" series. Robertson is a former president of the NBA Players Association.

In the same series, Frank Deford, a journalist for Sports Illustrated, NPR, and HBO, says, "Certainly, athletics is a valuable discipline, and a sound mind in a sound body is devoutly to be wished for." (He also says that traveling sports teams are not a requisite for higher education. Although this may be precisely true, I believe there is an educational benefit to be derived from intercollegiate competition, if properly managed as an immersive learning exercise.)

However, it is a sad commentary on higher education when a student-athlete like Dill can earn such prestige when ESPN superimposes a comically large animated hammer on his sideline performance, but cannot get more than a mention for his scholarly pursuits.

"Student-athletes are treated like gladiators—revered by fans and coveted by member institutions for their ability to produce revenue, but ultimately viewed as disposable commodities," says Robertson.

Unfortunately, if true, it is short sighted thinking. Students, whether they are athletes or not, should be treated like precious non-renewable resources. Each has only a few impressionable years to be carefully nurtured before they become full-fledged members of society.

College sports—especially in Division I—should not be banned, but perhaps they should be reconsidered with eye on the educational objectives.  Students can learn a lot from sports participation: Trust, collaboration, reliability, follow through, situational analysis, and strategic thinking.  But when we behave as Robertson says we do, elevating student-athletes to celebrity status and showcasing trivial performances on national television, we also teach that form is more important than substance.

If most of those 380,000 student-athletes are going to go professional in something else, would it not be wise to dedicate ourselves fully as educators to preparing them as professionals? Let us not forget the "student" in "student-athlete," and, as the hyphenated vernacular suggests, these young people should be students first.