Be Prepared: Welcome to the 2010 National Scout Jamboree 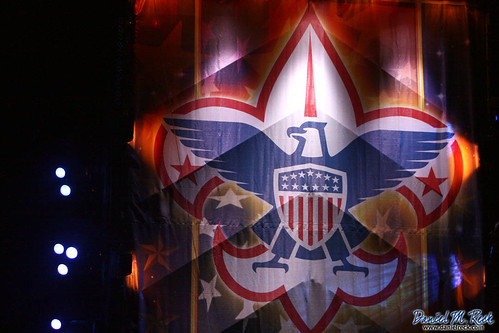 He was not prepared.

Fortunately for Boyce, the English boy he encountered was prepared. Recognizing the man’s confusion, the boy offered his assistance and helped Boyce to his destination. The unnamed boy following the oath he took as a Scout, in which he promised “to help other people at all times.” Boyce was thankful, learned his lesson about being prepared, and decided to learn more about these English Boy Scouts. He found out that their motto was “Be Prepared,” among other things. Eventually, he brought the Scouting movement to the United States, where it was officially founded in 1910.

I am joining over 45,000 Scouts, Scouters (adult advisors), and staff members who are descending upon a remote site in Virginia for the National Scout Jamboree this week. We will be celebrating a century of history for the Boy Scouts of America.

Before any of them could make the journey, however, they have endured months of preparation. Scouts have elected peers to be their special Jamboree leaders. Scoutmasters have taken time out for special Jamboree training sessions so that they can best advise these youth leaders. Jamboree troops have hosted shakedown camp outs to out the kinks. Over four thousand professionals and volunteers have dedicated countless hours to developing and implementing the logistics that go into building a temporary city to host the thousands of people arriving at the U.S. Army’s Fort A.P. Hill facility.

Be prepared, indeed. Now they are ready for the ultimate Scouting experience. They will interact with Scouts from all over the country, and several from the far-flung regions of the world. New friendships will be formed, and they will be long lasting. (I still keep in touch with my Jamboree staff colleagues from the 2001 Jamboree.) Scouts will meet President Obama, earn merit badges, learn from presenters from National Geographic and NASA, and participate in physical challenges at the four Action Centers.

Although Scouting is sometimes called “play with a purpose,” the National Scout Jamboree isn’t just all fun and games. Scouts will be performing daily with the Jamboree Band, they will be cooking their own meals (yes, young men CAN cook!), broadcasting at QBSA radio, and filling a number of Jamboree staff positions. Some will be joining me on the staff of the Jamboree Today newspaper, which is distributed daily by 6:00 AM. In all these things, they will be practicing their professional skills, interacting with others, showing leadership, and refining their idea of “what works.”

When these Scouts depart the Jamboree, they won’t just take souvenirs and photos. They will take the practical experience of networking with others through teamwork. It is a skill they will employ back home at school, through college, and on into their careers.

They are getting ready to Be Prepared… for life.

At the 2010 National Scout Jamboree, perhaps the assembly of Scouts will not just celebrate one hundred years of the Boy Scouts of America. They may also celebrate the “UNpreparedness” of William Boyce, for if he had been prepared that night in the London fog, there might not be any Boy Scouts on this side of the pond.

This week and next, as my staff responsibilities at Jamboree Today permit (and cell signals), I plan to blog about Scouting’s main principles as set out in the Scout Motto, Scout Law, and Scout Slogan.

Daniel M. Reck, M.S.Ed., is a copy editor for Jamboree Today, the daily newspaper of the Boy Scouts of America National Scout Jamboree at Fort A.P. Hill, Virginia. An Eagle Scout, he is also the Assistant Director of Greek Life, Leadership, and Involvement at Monmouth College in Illinois.