The Spirit of Scouting: Leading us into the next 100 years 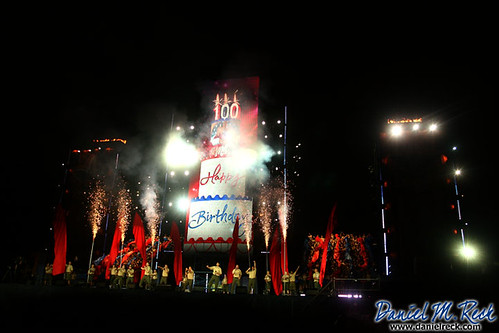 Remarks at the Court of Honor of Boy Scouts of America Troop 355
December 2, 2010 at 6:30 PM
First United Methodist Church of Monmouth, Illinois

This past summer, forty five thousand Boy Scouts and Scouters gathered together in Virginia to celebrate the one-hundredth anniversary of Scouting in America. One of Troop 355’s very own, Life Scout Nick Mainz, was there, too, as part of the contingent from the Illowa Council. These boys (and a few girls from the Venturing program) were all part of something special, the seventeenth National Scout Jamboree.

The Jamboree is like “summer camp extreme!” As such, every fourth year it offers “scouts the opportunity to participate in physically and intellectually challenging activities, [and introduce] them to new and rewarding experiences” (Harris Interactive). It’s like the Olympics, except that at its opening ceremony, rather than a parade of great athletes, there is an assembly of our nation’s greatest youth and some of their best Scouting friends from around the world.

The World Scouting Movement includes Scouts from 216 nations, from Sri Lanka, Saudi Arabia, Egypt, New Zealand, Pakistan, Iceland, Honduras, Korea, Lithuania, and Kazakhstan, among many others. And these Scouts are united in the same spirit, voiced in the Scout Oath: “On my honor, I will do my best to do my duty to God and my country; to help other people at all times; and to obey the Scout Law.” (That’s the original… a bit different, isn’t it?)

It was all started by a retired British army general named Robert Baden-Powell. He was concerned about the pressing problems of the day, including unemployment and economic difficulties. So in the summer of 1907, he brought together about 20 youngsters from different social backgrounds on Brownsea Island in England. They built shelters, learned the skills of life in the outdoors, and shared their experiences. (A replica of the camp was built at the jamboree, complete with British Scouts in authentic uniforms!)

With impressive enthusiasm, Scouting was born and came to America just three years later. Now Scouts and former Scouts are leaders in virtually every corner of society. One of them is Mike Rowe, the star of Dirty Jobs on Discovery channel. At the jamboree, he said that Scouting helped him learn how to be uncomfortable… and like it. After all, he said, life can be uncomfortable sometimes. It’s challenging! But after hiking miles in the rain with his troop, or battling hordes of mosquitoes, Mike said he learned that he could overcome any and every challenge.

When we look at today’s challenges in the world, from tough economic times, to deadly wars of ideology, it’s exciting to think that so many young people could come together in same place in the same spirit, embodied in the Scout Oath. That oath is a promise—a promise that Scouts will seek peace, and help other people at all times. It is also a promise of the future. After all, Scouts, you are our future. You will lead your communities, your professions, and even your nation. Together with the 28 million Scouts from around the globe, you will lead our world to the promise of peace.

Scouting’s founder, Lord Baden-Powell, longed for that peace as the first World War dragged into its third year, and he wrote this in 1917: “The roots of Scouting have grown among young people of all civilised countries and are developing more each day. It might be thought that if in years to come, a considerable proportion of the future citizens of each nation forms part of this brotherhood, they will be joined by a bond of personal friendship and mutual understanding such as has never existed before, which will help to find a solution to terrible international conflicts.”

A Scout is trustworthy, loyal, helpful, friendly, courteous, kind, obedient, cheerful, thrifty, brave, clean, and reverent. Can you think of better qualifications for the future leaders of our world, who will guide us from conflict to peace? I can’t. The best part is that they’re sitting right here, our future leaders, our Scouts. Let us celebrate them and the things they have done—and the things they will do—as guided by the Spirit of Scouting.

Daniel M. Reck, M.S.Ed., is a Unit Commissioner for the Illowa Council of the Boy Scouts of America. He was copy editor for Jamboree Today, the daily newspaper of the 2010 National Scout Jamboree at Fort A.P. Hill, Virginia. An Eagle Scout, he is also the Assistant Director of Greek Life, Leadership, and Involvement at Monmouth College in Illinois.