NOVEMBER 15, 2010 — MONMOUTH, ILL. — The Review Atlas newspaper featured an interview with Daniel M. Reck his upcoming performance with the Shadows of Bronze on the front page in their November 13-14 edition.  "Daniel Reck, Michael Surratt and Rebecca Johnson make up the musical group," says Review Atlas reporter Leanne Moore, "which brings together handbells, piano and wind instruments to create a unique sound of music."

The article highlights the Shadows of Bronze's performance at the First Lutheran Church of Monmouth, scheduled to begin at 7 p.m. on Friday.

"We try to be educational in our program," says Reck, as quoted in the article. "Lots of people have seen handbell ensembles, but we try to teach about how the instrument actually works, the history of the music and literature and show off techniques used to play handbells." 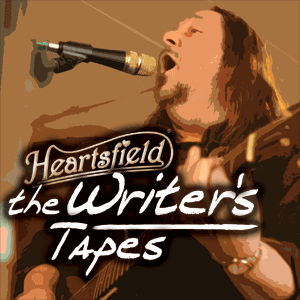 SEPTEMBER 25, 2010 — CHICAGO, ILL. — New artwork and photography from Daniel M. Reck are featured on the new reissues of two Heartsfield albums.  The aouthern rock band has charmed listeners with sweet guitar licks and foot stompin' beats since the 1970s and has issued nearly a dozen issues in that time.

One of the reissued albums featuring Reck's artwork originally debuted in 1999, when band leader Perry Jordan released The Writer's Tapes, an album which featured many unheard cuts of popular Heartsfield tunes and previously unrecorded tracks.

"Heartsfield has a long history of songwriting and recording and we wanted to share with our friends and fans a look at what made us groove," said Jordan of his album.

Reck was also the graphic designer and photographer for the reissue of All Over the Place, originally released in 2002. The record features tracks recorded at live concerts and live radio broadcasts, as well as from board recordings of club appearances.

On All Over the Place, the cover art will replicate the original album art.  However, the bonus for fans will be inside the case.  "I've created all new artwork and photography for the CD face and the rest of the liner and tray card" says Reck. "I also included a classic hard-to-find photo of frontman Perry Jordan and bass player Steve Eddington."

Reck will serve as a copy editor for the event’s Jamboree Today newspaper, which has a daily readership of about 50,000. He will work alongside both seasoned journalists and scouting youth members completing their first-ever newspaper assignments. Reck’s advising experience with The Mu of Monmouth College, a student-edited blog about men’s and women’s fraternity life on campus, caught the eye of Grant Jackson, the newspaper’s chairman.  Reck is Monmouth College’s assistant director of Greek life, leadership and involvement.

Reck, who has experience on a dozen Boy Scout summer camp staffs, is no stranger to working at a national jamboree. He served as an emergency medical technician in 2001 and has stayed in contact with fellow staff members from his first experience. He said he looks forward to networking with the 45,000 scouts, adult leaders and staff from across the nation who are attending this year’s jamboree.

JUNE 19, 2010 — HINSDALE, ILL. — Have you heard The Who's "Pinball Wizard" played on handbells?  The Shadows of Bronze, featuring handbell ringer Daniel M. Reck and pianist Michael B. Surratt, will perform this work and about a dozen others at concerts in the Chicago suburbs next weekend.

Reck and Surratt, along with flautist Rebecca M. Johnson, form a trio which performs a wide repertoire of music ranging from the sixteenth to twenty-first centuries.  Recognizable pops pieces like "Pinball Wizard" and "Plink, Plank, Plunk!" will be performed alongside stirring arrangements of "Amazing Grace" and of the hymn tune "Hyfrydol." [Video of "Symphonia on Hyfrydol"]

"The goal of the Shadows of Bronze is to engage our audience with an exciting program showcasing the many different ways that handbells can be used to perform music," says Reck, one of the group's founders.  "Many think of handbells as an instrument limited to playing hymns on Sunday morning and carols during the Christmas season."