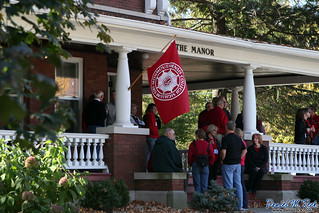 SEPTEMBER 9, 2008 — MONMOUTH, ILL. — Daniel M. Reck has been appointed as the new assistant director of Greek life, leadership, and involvement at Monmouth College in Illinois.  The posting was reported by Illinois radio station WGIL and also covered by his undergraduate alma mater, DePauw University.

WGIL's report says, "Reck's diverse employment background includes two years as a student life counselor at Ball State University, five years as a chief medical officer with Boy Scouts of America and his ongoing presidency of forzandoArts."  Reck recently finished a season as a marching instructor and pep band conductor at Hinsdale Central High School in Illinois, concurrent with his final year of graduate studies at Northwestern University.  He earned a Master of Science in Education and Social Policy from that university's School of Education and Social Policy. 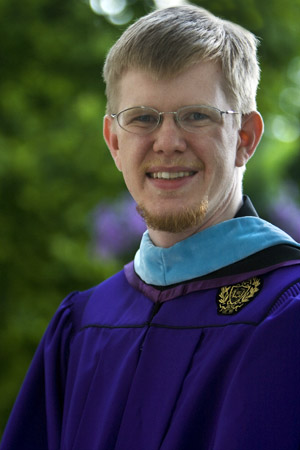 JUNE 21, 2008 — EVANSTON, ILL. — Alongside 153 of colleagues, Daniel Reck was awarded the Master of Science in Education and Social Policy degree at a convocation at Northwestern University's Cahn Auditorium today.

The ceremony featured an address from Susan Fuhrman, president of the Columbia University Teachers College.  "Schools need to move to a student-centered approach," she said. "Truly effective teaching must take into account the whole student."

Mr. Reck's master's research thesis, "Revisiting the Greenhouse Institute: Examining the Student Life Outcomes," explored one holistic approach to student education by examining the extra-academic experiences of students graduated from a two-year residential high school specially targeted for gifted students.  Furman's address directly commented on the use and misuse of technology in education, and Reck's research included review of these students' use of computers and social networking websites such as Facebook and Myspace as means of social communication in their residence hall environment.

"It was remarkable to find that when students at the Greenhouse Institute were first issued notebook computers, they would gather in the main lounge and instant message one another rather than simply talking to each other," said Reck.  "The Greenhouse Institute existed, in fact, in two worlds.  One was the physical campus, and the other—sometimes invisible to teachers and administrators—was virtual, existing entirely on the internet."

While performing his research, he assisted in Northwestern's Orientation and Parent Programs office, which works throughout the year to produce programming for new students and their families.  He also was on staff at Northwestern's student union, the Norris University Center, where his duties included administration of the student employee recognition program.

MAY 11, 2007 — CHICAGO, ILL. — For decades, southern rock band Heartsfield has charmed listeners with sweet guitar licks and foot stompin' beats.  The only problem was that fans needed a turntable to listen to the classic releases on vinyl records.  In the coming months, this will change as remastered recordings featuring graphic artwork by Daniel M. Reck will be released.

The first two albums, the self-titled Heartsfield and crowd-pleaser The Wonder of It All will be released in time for the holiday shopping season as part of the "Signature Series" of Heartsfield albums, which will feature retooled artwork in addition to crisper audio free of the pops and hisses associated with LP records.

"The ringers went through a couple dozen names before that one," Reck says, who conducted the ensemble from 1999 to 2001 during his residency at DePauw University.  "Those students were outstanding and great to work with," he says, "I wrote this piece for them but am glad that we can now share it with other two- and three-octave ensembles."

Outside of music, Reck will begin graduate studies in education and social policy at Northwestern University in Evanston, Illinois this summer.  He just finished a stint as a Student Life Counselor at Ball State University's Indiana Academy for Science, Mathematics, and Humanities, which is located in Muncie, Indiana.  For two years, he worked closely with the three hundred students as a mentor and program facilitator.  "They're the best Indiana has to offer," Reck says, "I think they taught me more than I tought them."  While at the Academy, Reck was composer-in-residence and assistant conductor for the University Schools Band, which combines students from the Academy and the neighboring Burris Laboratory School.  The band premiered Reck's "An American Fanfare" last month.

"Grüne Schlossglocken" is published by forzandoArts and the score is available for instant download.  The music may be heard on forzandoArts' YouTube channel.