"I'm thrilled to be joining the academic family at Midwestern," says Reck, whose background in higher education includes administrative positions in student affairs, information services, and communications will support his new responsibilities. He also brings with him experience as Managing Editor of the Jamboree Today news service for the Boy Scouts of America.

"There is an immense amount of data we're responsible for acurately tracking, storing, and analyzing," says Reck. "I am looking forward to the challenge."

Listen to the February 14 edition of Live and Local on Tumblr.

FEBRUARY 14, 2014 — URBANA, ILL. — Musician and educator Daniel M. Reck will be heard on today's Live and Local on WILL-FM radio. Reck will be playing handbells on the program as part of a preview of this Sunday's concert at St. Matthew Lutheran Church in Urbana, where he is director of handbell music.

"This isn't a handbell concert, though. We have guitarists, vocalists, pianists, and an organist who represent the entire Champaign-Urbana community," Reck says. "The program is very eclectic, ranging from jazz standards to classical arias."

Pianist Jeremy House is joining Reck on Live and Local, where they will play a special arrangement of "Amazing Grace."

In performance, Reck will suspend about two dozen handbells from a stand, creating a "handbell tree," and strike the bells with mallets as though they were a vibraphone set on end.

"You've never heard anything like it," Reck says. "Arranger Kevin McChesney has taken the tune we know and wrapped a whole new melody around it."

"Daniel has worked on Jamboree Today at past jamborees," says Shore. Most recently, Reck corresponded for the 76-year-old news service from the 22nd World Scout Jamboree hosted last summer by Sweden.

"Stephen and David [White] have put together the beginning of an outstanding team," says Reck, who is taking over the managing editor's desk from David White, who is editor of the The Quantico Sentry, the U.S. Marine Corps' oldest newspaper. "I can't say enough about David's leadership," Reck says. "I am honored to follow in his footsteps and look forward to the challenges as we head into the 2013 National Jamboree."

The 2013 National Scout Jamboree will be the first hosted at the newly-constructed Summit Bechtel Reserve in Mt. Hope, W.Va. The new, expansive facility is planned to present Scouts and Venturers with non-stop challenges never seen before at a national jamboree. Situated on the New River with 10,600 acres of nearly pristine wilderness, the Summit will whitewater rafting, climbing, a variety of shooting sports and BMX and trail biking. 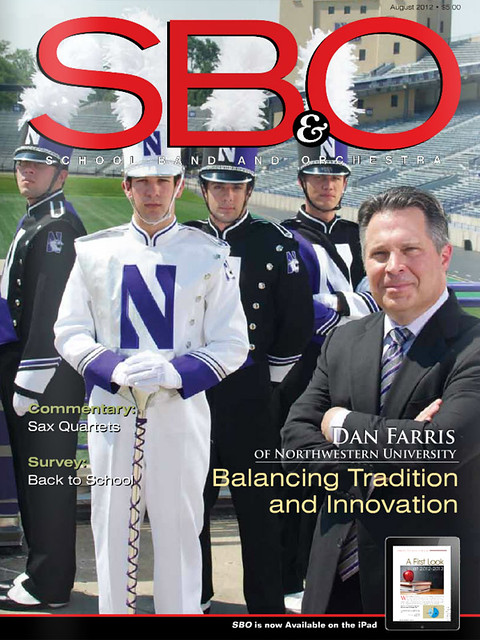 AUGUST 20, 2012 — EVANSTON, ILL. — Dripping with “heavy dew,” the snare drummers of the Northwestern University “Wildcat” Marching Band evoke performances of Blue Man Group. Geysers of water launch from the drum heads as they play, drenching themselves and everyone nearby on a particularly wet Saturday afternoon last fall. They’re all smiles.

It is one image of several shot by Daniel M. Reck to be showcased in the August issue of School Band and Orchestra magazine.

“Surrounding yourself with talented people is essential in running a program, especially for a marching band,” Daniel J. Farris, director of athletic bands at Northwestern University, says in the article.

“It’s been a privilege to work with Mr. Farris, first as a student, and now as part of the band’s staff,” says Reck. He has been the Director of Web Media for the band since 2007, which includes producing the band’s website, monitoring its social media, and working as a member of the band’s professional photography team. Reck's colleague, Director of Photography Tom McGrath, also contributed images including the issue's cover.

In the article, “Balancing Tradition and Innovation,” Farris and Director of Bands Mallory Thompson are interviewed extensively about their work as music educators and how the Wildcat Band as an all-volunteer ensemble encompassing nearly every major on the Northwestern campus creates a vibrant educational program.

“The Wildcat Band is very special among college bands,” says Reck. “It is very welcoming, with no auditions, but it is also very demanding. The band’s directors expect the students to take an active leadership role and work together towards excellence. That’s what I try to emphasize in the band’s online media.”